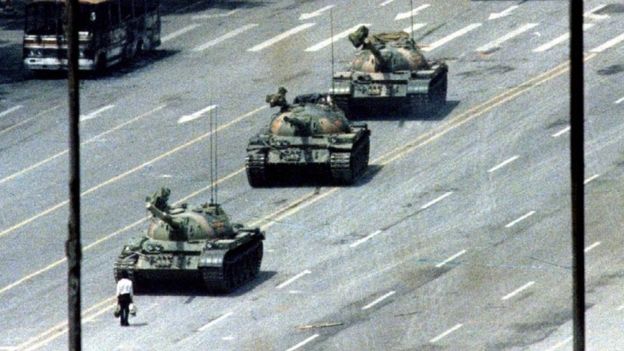 How many of you know the name Wang Weilin? As you scratch your heads, I’ll just jump in and tell you… Wang Weilin is the “Tank Man” associated with the Tiananmen Square protests that unfolded in China in 1989 (I know I was SO young then but this gets replayed frequently enough that many of you can recall this image, if not the name). As a column of tanks advanced through the square to discourage protestors, young Wang stood in front of the tanks to stop the advance. When the column shifted, Wang shifted. Was Wang’s protest more than an act of desperation in a desperate time? Absolutely. It was a decisive moment fueled by courage; courage that inspired others to rise in opposition to a then oppressive regime.

Too often in business and life we reduce leadership to a list of skills that the one in charge must possess to manage a group of followers. We might say an effective leader is a great communicator, planner, teacher, intellectual, or tactician. Sometimes we imagine a particular look for a leader, insisting that leaders are clean-cut, fit, and perhaps stand heads and shoulders above those they are called to lead. In business, we see leadership in those who can navigate the organization through a crisis or those who can craft an inspiring vision for the team and the organization it serves. While I can’t argue with any of these traits of successful leadership, I often wonder if we spend too much time dissecting and debating what constitutes leadership and what doesn’t. What if leadership is really just a byproduct of courage? The courage to speak and act in a manner that inspires courage in others.

Poor leadership is the silent killer in business. In my career, I’ve worked with many so-called leaders who never had the backbone to make the tough call, to push back internally and upwardly, or go to bat for those he was supposedly leading. As philosopher Soren Kierkegaard once affirmed, “if you refuse to lose your footing from time to time, you will lose yourself”. Playing it safe alienates your team, stymies initiative, and usually leads to poor retention of the team. A true leader not only manages to teach towards the completion of goals and objectives, but also gets out in front of the team if the situation requires a drastic change in approach. Ask yourself, “Do I want to work for a manager who’s unwilling to take the risks that they are asking me to take?” You already know the answer.

Courage is also embodied when the leader is willing to recognize, “I don’t have an answer,” or, “I need more information before I can make a decision.” Winston Churchill, who we often remember as uber-decisive, recognized the courage in stepping back and being led. “Courage,” Churchill quipped, “is what it takes to stand up and speak; courage is also what it takes to sit down and listen.” In the business environment, a leader should also be willing to step back and learn from those they are leading. Many great ideas, terrific processes, and deft marking approaches have died an untimely death because the one in charge would only listen to his voice.

No one knows for sure what happened to Wang Weilin following his standoff in June of 1989. Some say he was arrested and executed; others say he remains in hiding even today. However, Wang’s courage – his leadership – endures. If you truly want to lead in business as in life, you must be willing to put your people, the community, and the cause above your own needs. I choose to lead.

How To Delegate Effectively and Be Completely Satisfied With the Results

Adjusting To The Expedient Economy

Talent IS Your Multiplier